When we first announced our rebrand from One Diary to Cronofy last year, we explained the origins of the name we chose in a blog post:

‘Derived from “Chronos”, the Greek personification of time, our new name embodies the motivation behind our work: making the most of the time you have.’

Seven months on, we still feel that our name change was one of the best decisions we’ve made.

Rebranding isn’t easy for any company, and there are all too many horror stories of it going wrong and users hating the change. However, we were lucky. We got a lot of great feedback from the community who agreed with us – that ‘Cronofy’ represents the ‘new’ company and service better, and is more in line with what we want to achieve. Best of all, there were no disparaging comments against the change, so it was a win-win.

What’s in a name?

Being an API service provider, the vast majority of visitors to our website, social channels and other media see the name ‘Cronofy’ and just get it straight away. However, it’s a slightly different story when talking about Cronofy in an aural context, or seeing people’s search results for Cronofy in our website analytics.

Interestingly, these variations on our spelling today are matched by the historical roots of the original ‘Chronos’. It also has alternative spelling variations of ‘Chronus’ and even ‘Khronos’, which are accompanied by the warning not to confuse it with the separate entity of Cronus (the Titan father of Zeus, rather than the personification of time). 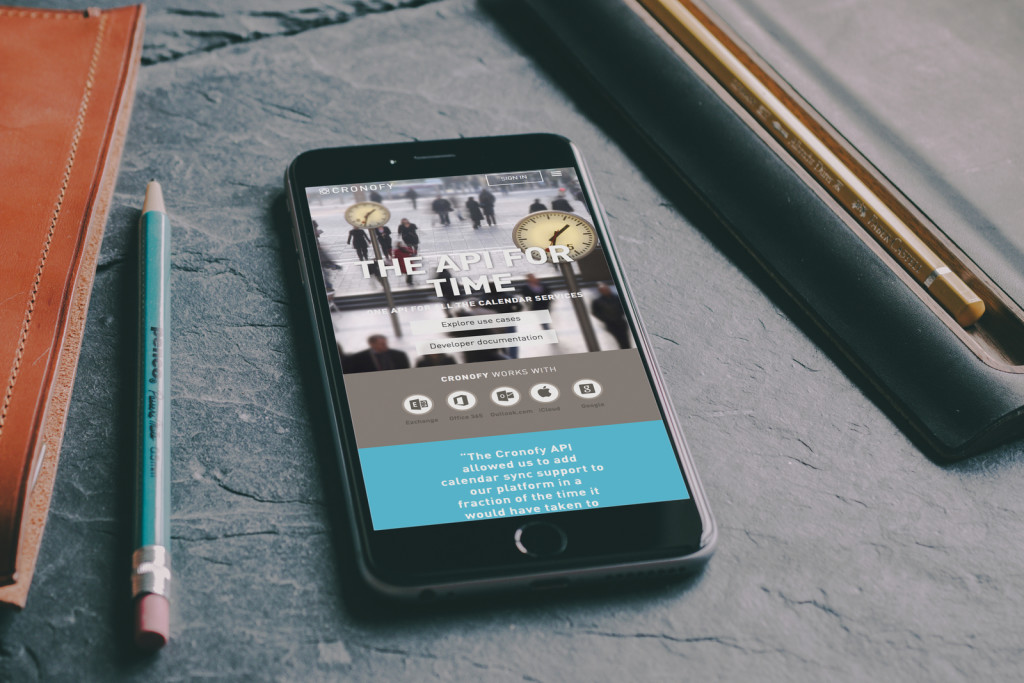 We knew that whatever spelling – ‘cronofy’, ‘chronofy’, ‘chronify’ or ‘cronify’ – we chose, it would generate a certain level of difficulty in the spoken form. And there was a danger that there would be potential written inconsistencies from a user perspective.

However, we loved the concept and definitely wanted to head in that direction. Many branding experts are of the opinion that your company name should be ‘radio proof’ – clearly understood when spoken, but we’re an API provider in the digital age. The vast majority of our communications are written, or speech accompanied by words (e.g. talks with slide decks, introductions with business cards, names on lanyards and so on). It also has a distinct advantage in that our name sets us apart, particularly in the web industry, and people know straight away if they don’t come across the Cronofy they’re looking for.

The perks of being different

Furthermore, the whole company and service we provide is based around doing things differently to everyone else. We wouldn’t exist if we didn’t. It’s as simple as that. We love that our name reflects what we do on a lot of varying levels.

As we continue to spread the word of Cronofy, it will only become more familiar and recognisable to people as a name. We’re seeing this happen already, and whilst there will always be a tiny minority who type chronify or cronify or chronofy by mistake, the important thing is that they know who we are and what they’re actually looking for.

Cronofy. A revolutionary service with a name indistinguishable from the concept.