We are proud and excited to announce today that we have been selected to join the Upscale program from Tech City UK.

This is the second edition of the Upscale programme, 33 of the fastest growing and most promising UK tech companies have been chosen for growth acceleration.

As part of Upscale, early stage companies power their scaling journey, under the mentorship of some of the UK’s most successful tech entrepreneurs including Lastminute.com founders Martha Lane Fox and Brent Hoberman; successful investor and Lovefilm founder Saul Klein; Candy Crush creator Riccardo Zacconi and Lesley Eccles, founder of FanDuel.com.

Almost a third of the companies selected come from outside London, showing that the UK’s tech sector is creating jobs and opportunity nationwide. The full contribution of the UK’s digital and tech sector to the UK economy will be revealed by Tech City UK in the coming weeks when it publishes its Tech Nation 2017 report, publishing the statistics and stories behind the rapidly expanding digital economy. Companies from outside London include Cambridge Intelligence (Cambridge), Cronofy (Nottingham), LivingLens (Liverpool) and DueCourse (Manchester).

Our CEO and co-founder, Adam Bird, said “Being selected for Upscale after such a competitive process is immensely satisfying for the Cronofy team. We set out from day one to seize the global opportunity to connect the world’s calendars and give people time. The support of founders and coaches that Tech City UK have assembled is an amazingly valuable springboard for our mission.” 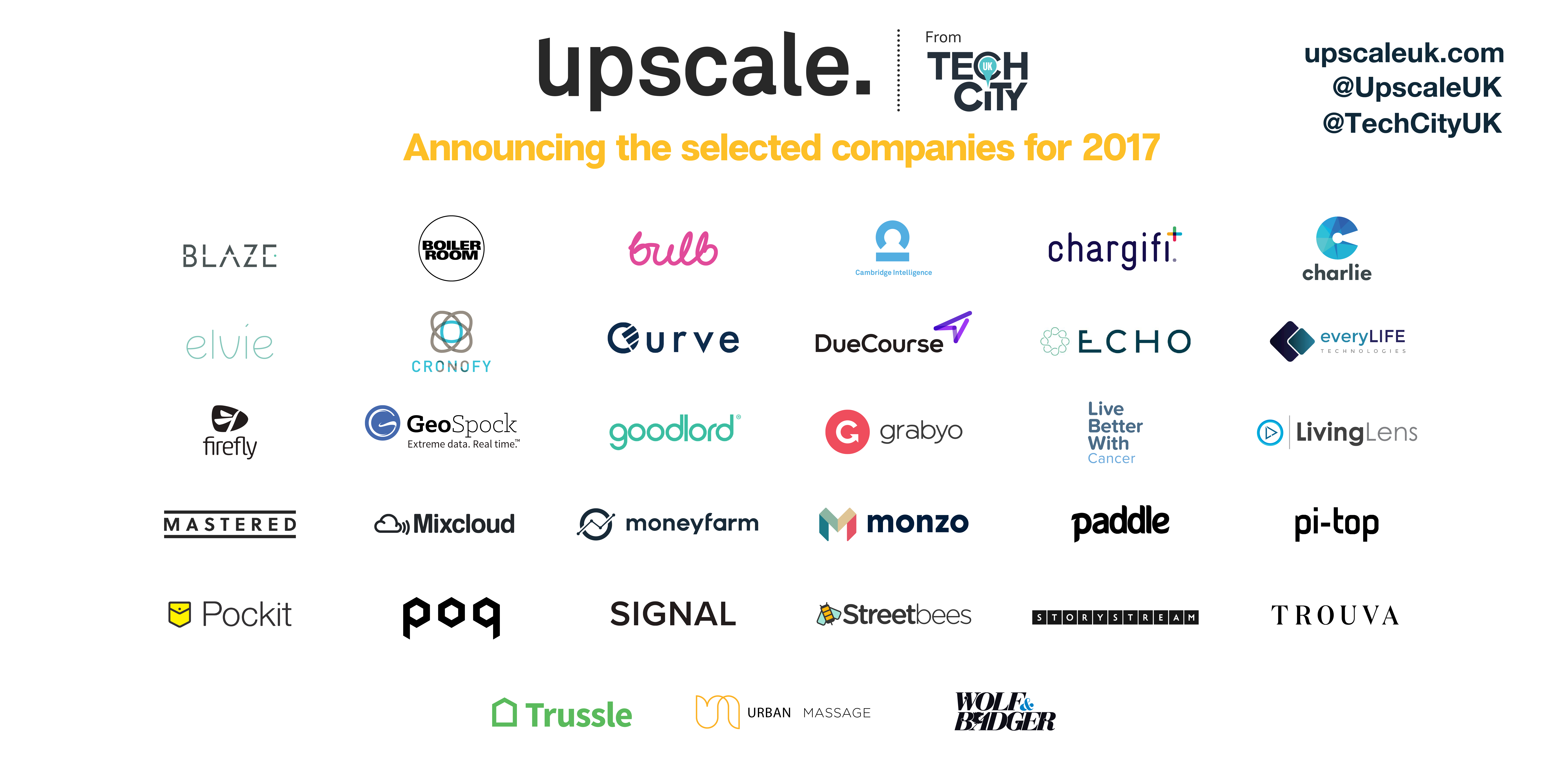 Upscale is part of Tech City UK’s commitment to support UK technology businesses at every stage of their lifecycle and growth trajectory, from the Digital Business Academy for very early stage entrepreneurs, to Future Fifty for much later stage businesses.

Gerard Grech, CEO of Tech City UK, said: “One of the objectives of Tech City UK is to accelerate the growth of the country’s digital and tech sector. The companies that join our Upscale programme have already overcome significant hurdles and have the makings of brilliant businesses. It’s also great to see so many regions and sectors represented in the cohort, demonstrating the great diversity this country has when it comes to digital technology, as highlighted by the Prime Minister in her recent industrial strategy announcement. ”

“It’s particularly great to see four fantastic female founders – Tania Boler, Tamara Rajah, Tugce Bulut and Emily Brooke – amongst the new intake but the industry needs to work harder to make sure that women are getting to senior roles in the sector. There are many successful women in tech and we must promote these role models and inspire more girls to consider tech as a job where they can build an amazing, global career that can change people’s lives.”

Eileen Burbidge, General Partner of Passion Capital and Chair of Tech City UK, said: “We welcome the next cohort to our Upscale programme. They can be confident that some of the most experienced, brightest minds in the tech ecosystem will be helping them to build their business over the coming year. We would like to thank all our partners and supporters who have helped to put together the programme and make it what it is by devoting time and effort to coaching and mentoring these young businesses.”

As part of the programme, the 33 Upscale companies will work with experienced and recognised Scale Coaches. This year, some of the graduates of Tech City UK’s first Upscale programme will return to mentor the new intake, demonstrating one of the strengths of the UK’s tech ecosystem where successful companies work hard to help the next generation.

Companies will take part in as many as 30 sessions and socials, that are designed around their specific needs. The challenges discussed will include maintaining team morale, managing the board, raising future funds and taking the company global.

The Cronofy team is looking forward to meeting inspiring tech founders and learning from their experiences. We will keep you updated on our progress in future blog posts. Stay tuned!