Across the globe, many of the most influential and profitable organizations are abandoning traditional performance reviews in favor of a radically different approach. Are they onto something?

The annual performance review. Since the mid-20th century, it’s been a permanent fixture within the corporate world. It’s ubiquity is prolific; so much so, that you’d be hard pressed to find anyone that’s worked in an office setting that hasn’t encountered it, in one form or another.

And while it can take many forms, at its core the idea remains the same. An employee’s performance is managed and tracked over a twelve month period. Every year, often in January, managers and HR will collect and collate feedback on each employee’s performance and activity, and decide whether they are on track versus expectation.

If it’s decided that they are in fact on track, then there are rewards (financial or otherwise) to be gained. If not, then a plan is generally put in place in order to help the employee get to where it’s deemed they need to be. This cycle then repeats, annually, with very few opportunities to ‘check in’ or course correct in between reviews. As a result, they are inherently backwards looks and reactionary. Moreover, when faced with a number of employees to assess and review, these times of year often have managers and HR executives overwhelmed by paperwork.

For some, the mere mention of this annual event gives rise to feelings of dread. Harvard Business Review, channeling the feelings of this cohort, put it bluntly when they proclaimed: No one likes review time.

For others, it can be something to look forward to, as it represents one of the few times – if not the only time – during the course of the year when they can expect to get some feedback from their leader(s).

And for the rest of us, our feelings towards this yearly meeting tend to lie somewhere between apathy and a dull ache. While it may not be our favorite event of the year, we certainly understand its purpose, or at the very least, its intended purpose. And like many other [contrived] features of corporate life, we roll with it.

Afterall, organizations, especially large ones, need some way of understanding how their employees are performing, and where adjustments should be made. Likewise, employees benefit from understanding the areas in which they’ve excelled and the areas in which they could use improvement. And it’s these very needs that gave rise to the annual performance review in the first place.

But does the annual performance review, in fact, satisfy these needs?

Annual reviews have fallen out of favor 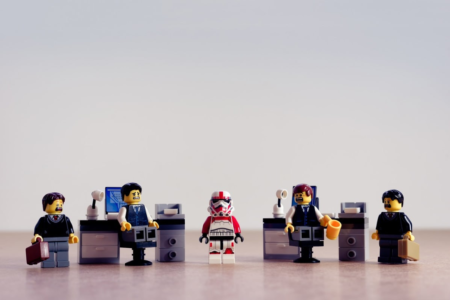 After years of study and analysis, researchers, thought leaders and companies themselves have come to the conclusion that, more often than not, the annual performance review does not serve its intended purpose. Worse still, it can actually do more harm than good.

A report from Deloitte found that only 8% of companies agree that their performance management process drives a high level of value; an entire 58% confirmed that it was not an effective use of time. Similarly, a CEB survey concluded 66% of employees felt that preparing for reviews negatively affected their productivity. And most startling, a staggering 95% of managers weren’t satisfied with their company’s approach to performance management.

In Deloitte’s case, the total time spent on wasteful appraisal tasks (completing forms, holding meetings, agreeing ratings) was close to 2 million hours a year. It was the staggering scale of this waste that prompted them to completely overhaul their performance appraisal process in 2015. Since then, the likes of Microsoft and Accenture have followed suit.

And it’s not hard to understand why. For large multinational corporations, where billable minutes is often worth hundreds of dollars, where is the logic in wasting precious resources in a process that doesn’t provide returns?

A manager for Adobe Systems Inc, itself a multi-billion dollar company operating in markets all around the world, called their traditional performance review process — which involved ranking all of their 11,000 employees on scale of 1 to 4 — a “soul-crushing exercise”.

Soul-crushing perhaps; but not unique. And not even the worst example.

Perhaps you’ve heard of the  ‘Rank and yank’ strategy. Introduced in the 1980s by General Electric CEO Jack Welch, this process sees employees numerically rated, with the bottom 10% let go. This – some might call archaic – process, although still employed by some organizations, simply doesn’t sit right with modern employees.

And can we really be surprised?

Employee expectations today are vastly different than they were 20 or 30 years ago. Namely, meaning and purpose have taken center stage and now feature far more prominently in work wish-lists. In fact, 9 out of 10 people are willing to earn less money, in favor of a more meaningful work life. And not just a little less. On average, they were willing to give up 23%. That’s hugely significant. For some perspective, the average American spends 21% of their income on housing, which is rightly considered a basic need. So what this indicates iis that the need for meaning, in monetary terms, is equal to, if not greater than, the need for shelter.

More than that, the pace of business – and life in general, for that matter – far exceeds what it did just a few decades ago. It simply doesn’t make sense, given the way people and teams work today, to set goals for the year and review them 12-months later; more often than not, they will have lost their relevance by that point.

“Once-a-year goals are too “batched” for a real-time world, and conversations about year-end ratings are generally less valuable than conversations conducted in the moment about actual performance.”

And that’s the key: employees have a desire for real-time, in the moment feedback on how they’re doing. Insufficient feedback i.e. only once a year — or worse, no feedback at all — leads to a lack of direction, lack of motivation and, ultimately, lack of profit. In fact, each disengaged employee costs a company as much 34% of their salary, in lost productivity, missed shifts and disrupting other colleagues with their negative attitude.

So with employee wants and needs changing so significantly, the way we manage their performance must surely adapt as well.

There’s a need for a new role for the manager; from ranker and yanker, to long-term coach.

What we’ve seen, in the last decade or so, is a new paradigm emerging – what has grown to be called ‘Continuous Performance Management’. It can be characterized as a reaction against the traditional

So what is ‘Continuous Performance Management’?

By its very nature, it can be tricky to define. That’s because there isn’t a specific set of criteria, rating scales or templates to help shape its approach. Indeed, it can look different from business to business, depending on company strategy and objectives. But the fundamental concept carries through, regardless of how it manifests itself: an individualized process of continuous feedback loops, in which ongoing coaching conversations between managers and their employees anchor a development path focused on leveraging and expanding upon a person’s strengths.

It can take the form of:

The idea is an agile process of continuous dialogue that feeds into a development plan and a greater understanding of an employee’s strengths and weaknesses.

This dialogue is made up of coaching 1:1s, collaborative goal setting and feedback sessions anchored by development reviews that, because of their frequency, are inherently less biased, more objective and ultimately more meaningful.

The frequency and consistency with which these conversations take place, provide a space for managers and employees to discover and develop their capabilities, while building a strong collaborative working relationship.

Moreover, it gives managers not only a clearer understanding of their team’s ambitions, but also a powerful tool with which to guide the common effort towards team and organizational objectives, leveraging the skills, capabilities and aspirations of each individual on their team.

So, you’re convinced; you want to make the change towards Continuous Performance Management. But where to start?

To advocate the business case for replacing annual reviews with a more continuous process, there’s three key things to remember…

Without proper buy-in from the right decision makers, making such a fundamental operational change is going to be an uphill battle, if not impossible. Initially, stakeholders may be skeptical of the administrative demands of adopting a more continuous means of appraisal. One might consider mapping out what this change will look like for your particular company structure, making sure to highlight the benefits to be gained.This vision will be crucial to win buy-in from senior leadership.

Make it a seamless transition

You may be worrying that continuous feedback loops individualized to each of your employees sounds like a lot of added work for HR and managers, but this need not be the case. In fact, by removing the annual review – and all the pressure that a single conversation per year comes along with – and replacing it with many, smaller conversations integrated into the everyday work flow, it can actually mean less work. Moreover, software solutions are available to assist in scheduling meetings, monitoring performance against development goals and capturing feedback notes throughout the year, thereby removing adiming and logistical friction from the process and freeing up HR, managers and employees alike to focus on the important things.

To properly recognize employees’ performance and help guide them on their development path, HR and managers need to be able to see it as clearly and objectively as possible. This means frequent touchpoints and thereby many data points; ideally with a mix of qualitative and quantitative feedback.

Performance and development reviews are most effective when, rather than simply a snapshot of just one moment in time, they accurately represent the entire period in question. As such, having the progress of 1:1s, goals, agreements and feedback readily at hand makes it easy to conduct transparent and objective reviews that proactively look forward, as opposed to reactively looking backwards. Software solutions –  like Duuoo for instance – make it easy to seamlessly integrate these feedback moments into the work ecosystem.

Continuous Performance Management has been proven to engage and motivate teams. Frequent, individualized and open dialogues between managers and their team members — in conjunction with relevant metrics — strengthen HR and leadership’s understanding of, and influence over, future commercial success.

So if you want to inspire your employees in a meaningful way, and — as Adobe, IBM, Microsoft and Deloitte have found — breathe new life into your performance management strategy, it’s worth considering making a change. After all, engaged employees make for stronger teams, and strong teams build successful organizations.