‘…although Topcoder is a competitive platform, everyone is incredibly supportive toward one another even if they lose!’

Nick Castillo, Lead Evangelist at Topcoder, tells us the secrets of a great hack submission, which famous startup founders are Topcoder community members, and what makes a good API… 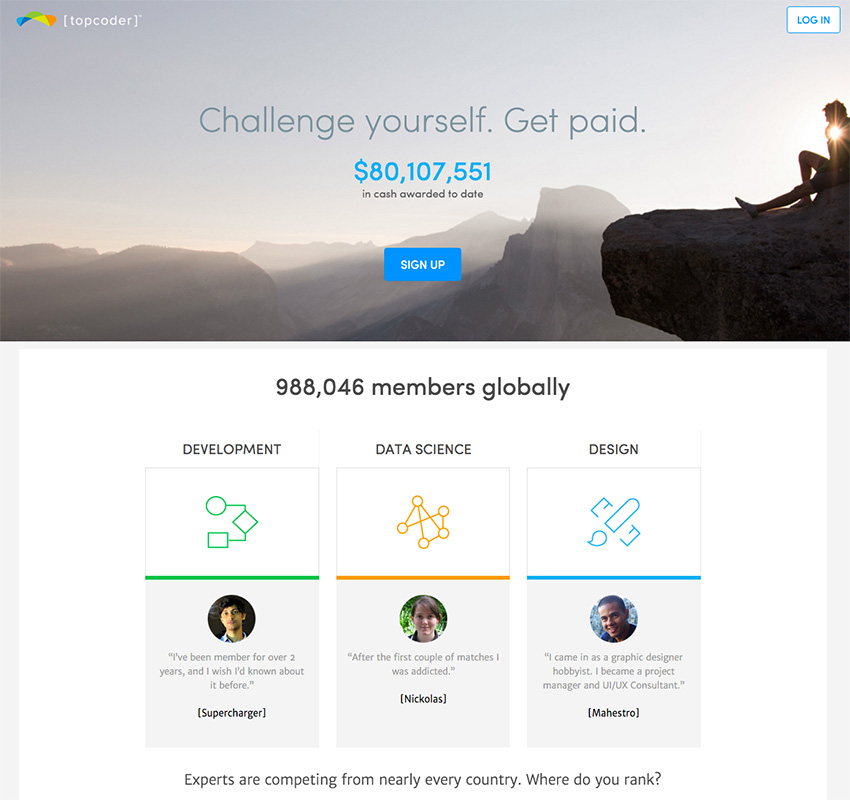 Hi Nick, can you tell us a bit about yourself and your role at Topcoder?

I started off my career as a Java Developer working for various companies, one being Brivo Systems. Brivo was an access control company and I had worked on their web application. They soon spawned an innovation department, which I had joined, and we created some exciting solutions such as opening doors using Google Glass. We wouldn’t have been able to do any of that without the help of Topcoder and their crowd.

Experiencing first hand how effective utilizing the crowd could be, I became a firm believer that this was going to be the way companies would be scaling their businesses and I hopped aboard! As Topcoder’s Lead Evangelist, my job is to assure that our members are kept up to date with the latest news of what is happening within the community through newsletters, blogs, and videos. I also run the Fun Hackathons that we put on every month that feature two APIs that participants must use in their completed app.

Why is the Topcoder community such a good place to be?

Topcoder is a great community to join because of the vast amount of talent and accessible work to enhance your current skills or to learn a new one. The name of the platform is actually somewhat misleading as we also have a large designer sub-community.

One of my most favorite things to tell people is that although Topcoder is a competitive platform, everyone is incredibly supportive toward one another even if they lose. Since our members are from around the world, we have actually had several members arrange meet-ups where they would all meet up in one country and go exploring together!

What’s been the most memorable Topcoder competition for you and why?

I would say the first Topcoder Open (TCO) event that I had attended in 2013 would be the most memorable. Topcoder Open is our flagship event that occurs annually. Members compete in various challenges throughout the year, accrue points, and if they are on the top of the leaderboard at a specific time, they will earn an all-expense trip to the TCO finals!

In 2013, the event was held in Washington DC and I was attending as a Topcoder customer. When I had first walked into the “arena”, the light was dim with pink and purple lighting with a stage where the finalists were either going to be coding or designing and several sponsor booths around the floor. It certainly felt like the “olympics of coding” where the best of the best from around the world came to compete. Now as a Topcoder Staff Member, my goal is to help create that same sense of feel for all future TCOs to come. 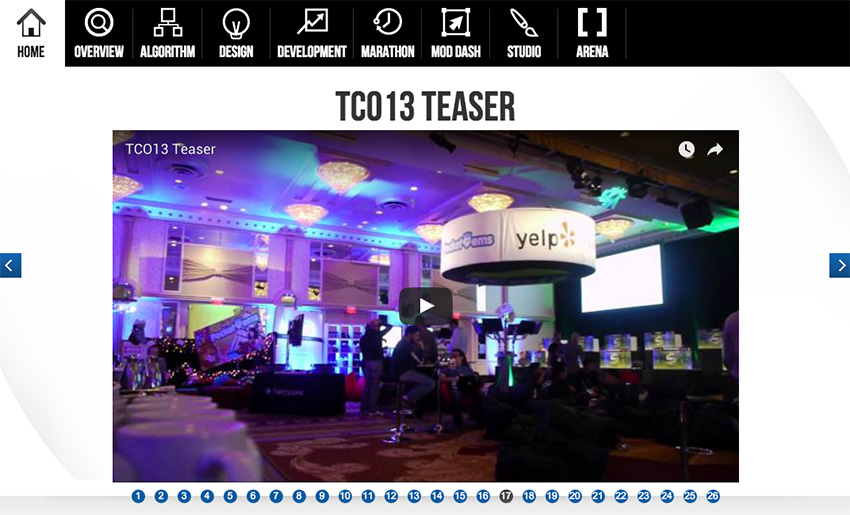 What’s the secret of a great challenge submission?

It really depends on the submission. If you are a member participating in a coding competition, you obviously want to satisfy all the requirements laid out in the challenge description and thoroughly test your code, even those edge cases.

If the member is participating in a design competition, you obviously want your submission to look amazing, but also keep the user experience in mind.

If you are looking to participate in a hackathon challenge, having an innovative and useful approach will get you far. Obviously your app has to work, but there may be some leniency when it comes to small bugs and look and feel when the judges score.

What advice would you give to someone considering entering a coding challenge who lacks confidence in their work?

It happens. Keep competing. No one who you see at the top of the performance board got there overnight. You may lose your first few challenges, but that should not deter you. If you submit to a challenge and pass review, you are granted access to view the winner’s submission, so that is a great way to learn alternative ways to complete tasks.

As mentioned earlier, members are very supportive of each other so if you were to ask a question if you got stuck you may get assistance from one of your fellow community members! 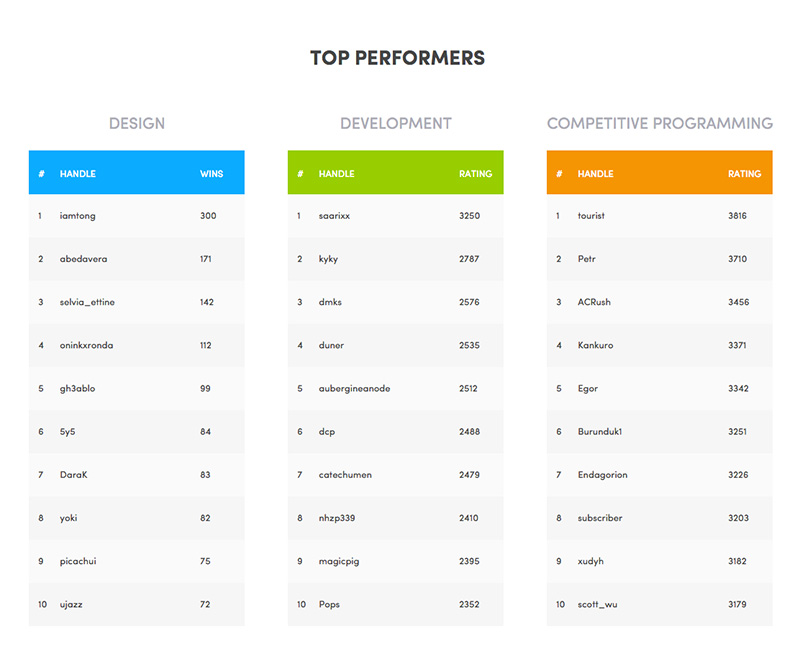 Why are coding challenges becoming increasingly important to companies looking to hire developers?

Topcoder has actually had quite a few members that have been hired by companies we partner with. The fact that the coding challenges that the members work on are for real businesses, these companies may take note of seeing a member handle over and over, meet them at a Topcoder event such as TCO, and offer them a job.

Companies love seeing what a developer can do with their products and can gauge their abilities by being able to access statistics such as the member’s rating, fulfilment, and earnings on challenges that they have competed in. Companies are able to assess a potential candidate in such a way that a simple interview may not have provided.

What advice would you give to a developer looking to practice their skills before a big interview?

I would look for some active challenges to participate in on Topcoder that are related to the technologies that you will be working with. You would gather experience of how real companies utilize that specific tech and it would be great to mention in an interview how you had just won a challenge and explain what it is you actually did.

What are some of Topcoder’s biggest success stories for matching programmers and companies?

We have had members that have gone on to work for companies such as MemSQL, Google, Facebook, and SpaceX.

Interesting fact: Back in the day we had members by the name of Adam D’Angelo (Founder of Quora) and Mark Zuckerberg (Creator of Facebook). They seem to be doing pretty well for themselves!

Why did you choose the Cronofy API for your latest Fun Hackathon Challenge?

I was in search for a fun looking and relative API to include in our last Fun Hackathon. We have wanted to redesign our forum platform for a while now so we thought we’d give the community an opportunity to bring some ideas to our attention.

During one of my visits to the TechCrunch website, I had stumbled upon an article talking about the Cronofy API. I put two and two together when I found out that Cronofy is a calendaring API and thought that the crowd would love to develop with a new and seemingly easy to use interface. 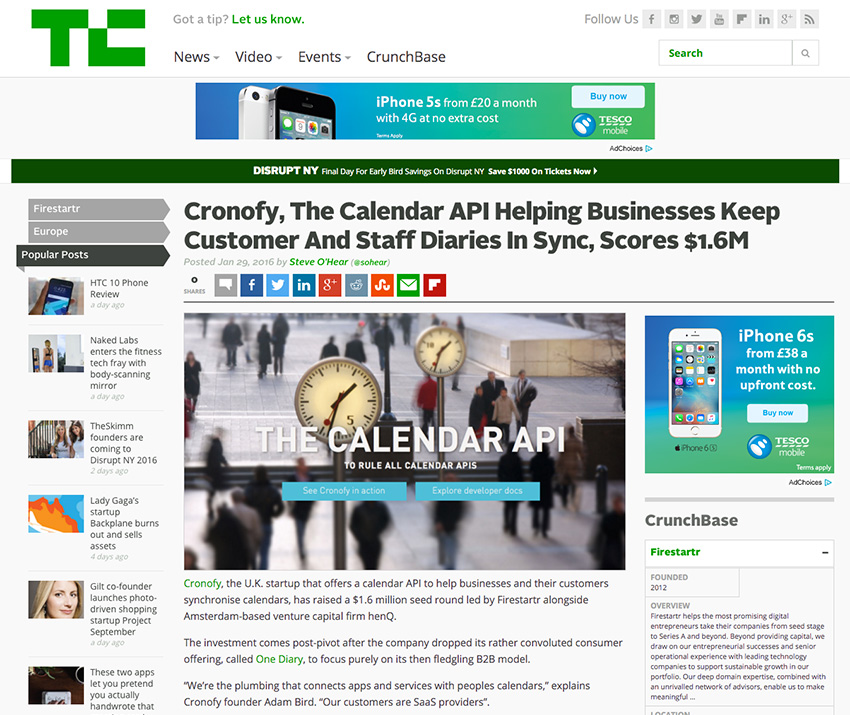 What would you say are the key qualities of a good API?

The first and foremost quality a good API needs to have aside from its usefulness is its ease of use. Developers love using APIs that they can just dive into and utilize in their app. Visually appealing, well-organized, and easy to understand documentation can go a long way when building an API for developer consumption. Making sure that an API’s endpoints are simple and concise will go a long way in helping the developer quickly understand how to use it for their purpose. Also, example code is a great way to ramp up developers, especially if they are new to coding.

What interesting things has Topcoder got lined up this year?

We always have something fun going on Topcoder! We have just launched a new program called the “Topcoder Blitz”, where we have one customer who will be releasing a slew of challenges in a period of two months. There is a scoreboard that keeps track of the points you get (which are accrued based on the amount of money you win for that challenge) and at the end of the period, the top 10 members on the leaderboard get a payout from the money pot that has been growing the entire time.

IBM is leading the charge as our first customer to utilize this program and for more details you can visit the web page here. The hope is to have Blitzes running in parallel so members have more opportunity to get on the leaderboard. It is a win/win for everyone involved!

We are also ramping up for our Regional TCO events. Over the years we have realized that not everyone who wants to attend the TCO event can (visa issues for example) so we have decided to put on mini events around the world so our members can have that physical sense of community. This year we will be hosting events in NYC, India, Indonesia, and Beijing with our finals in November to take place in our nation’s capital, Washington DC. An exciting year for sure!

Thanks Nick! We’re looking forward to seeing it all unfold!